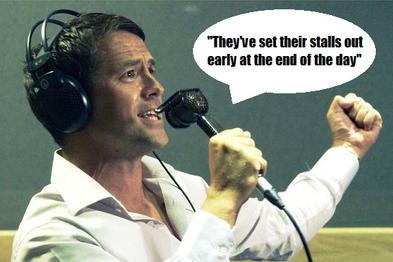 But that does not mean he should be a TV commentator. Given the way that idiot players are co-commentators though I think my son is way over-qualified. What are people thinking when they make these decisions?

Turning off the sound is like throwing out the baby with the bathwater. I like hearing the crowd signing and chanting. And especially when those sitting near the commentators can scream obscenities so loud we can all hear them. And what is it about these “words” that requires people to apologize to their listeners? You think people are actually offended or have not heard these words before? What world are people living in? On any TV you can see dead-bodies and rampaging violence but oh protect me from someone saying “fuck” out loud.

Anyway, I digress. It’s hard to know who’s the biggest idiot that I have to listen to (and I include my son – though I’m not saying which one – though the choice is rich and deep – a highly qualified selection is available). Knowing that I have to listen to Tony Gayle though is likely to cast a cloud over the entire game. And particularly when it’s Arsenal versus one of his old teams. He’s not just an idiot but also a biased one. But is he worse than Michael Owen? Not clear. Owen is working hard to prove that he’s as stupid off the field as he was utterly one-dimensional on the field.

Thankfully not all co-commentators are retarded. Le Saux and Dixon demonstrate how to actually complement a commentary team and provide insightful comments. And heavens above, who would have predicted a couple of years back that I could add Gary Neville to that list. He is arguably the best (but give me Lee). Of course this is just about offset by the existence of his moronic brother Phil.

So who’s the worst? Here’s my list – it’s hard to sort them because it’s like asking who’s your favourite Spurs player – who really cares? 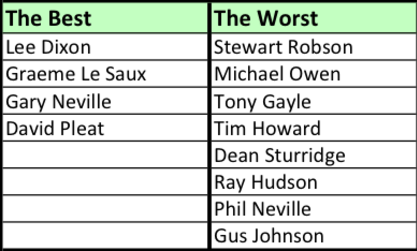 But on principle I think the dog pooh (sorry Dennis) must go to Stewart Robson. Unfortunately I remember him as a player; boring, average and under-delivered in his short career (given the expectations around him). And now he’s tedious droning voice along with his hatred of all things AW make it sound like, for any Arsenal game, he’s continually trying to search for validation and proof of his anti-AW views. There’s nothing worse than having one of your own turn against you.

It feels appropriate to end this little diatribe on the utterly embarrassing combination of Ray Hudson and Gus Johnson (ok, I know he’s a lead commentator not a co-commentator but how could he be left off the list of the worst at anything). Insults do not do justice (though they are enjoyable and warranted). Again, what were people thinking? Ray feels compelled to demonstrate that he made it beyond 5th grade by constructing tortuous similes that both detract from the game itself and take longer to complete than the action he’s referring to. With Ray it’s all about him – trying to make himself interesting. Man, did he fail on that front. He’s like a (half-) thinking man’s Tommy Smyth  (like that simile, huh?). And, finally, Gus Johnson. I wish he’d just fuck-off. Oh, right he did. Nice way to end on a positive note then. 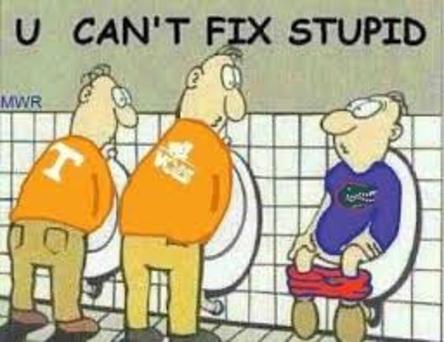